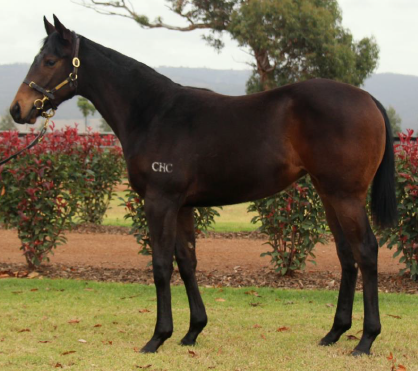 Two new girls have joined our growing band of fillies and mares at Glentree South, our agistment farm at Modewarre, near Geelong and Victoria’s Surf Coast.

They are weanlings by Vancouver and Rich Enuff, bought at the Great Southern Sale.
Vancouver is a hot new stallion, his oldest progeny foals, and racing fans remember his super fast Golden Slipper win. In fact, he was unbeaten in his four starts at two, stamping himself as Medaglia d’Oro’s best son.
Vancouver foals have sold up to $625,000 this year.
The dam of our filly is a beauty, too, with plenty of black type to her name. Miss Pelear won the Auckland Racing Club’s Rich Hill Mile, a Group 2 race, and was also Group 1 placed.
Our second weanling filly is by Rich Enuff, also in his first season, a son of Victoria’s best stallion, Written Tycoon. The dam in this case is the Marscay mare Goldirocks, who has had six winners from her eight foals to race. Rich Enuff competed at the highest level, winning the VRC Danehill Stakes. He was runner-up in the VATC Caulfield Guineas, Group 1.

Our new filly by Starspangledbanner
The Closer is a Classic